What we are celebrating when we celebrate Cinco de Mayo is known as the Battle of Puebla in Mexico.  That is when Santa Ana and his "ragger muffin" militia defeated Napolean on a hill outside the City of Puebla, Mexico on May the 5th, 1862.   It was a huge victory as the Mexican people had made a decision that they had had enough of the autocratic rule of the French ruler, Maximilian and his wife Carlotta.   During his reign, the Mexican people were not allowed to train their own military--hence Santa Ana was directing a Militia of workers who had no uniforms or serious training--making the victory totally amazing!

At the time of the battle, the Mexican people were directing a horse drawn carriage with Maximilian and  Carlotta from the Chapultepec Castle in Mexico City to the Port of Vera Cruz for their voyage back to France.

Most Mexican people do not celebrate Cinco de Mayo as much as  Americans do--I personally think we can thank the beer industry for making it a big party--but what the hay--it is great fun.  The Bizcochito cookie was developed in Mexico to celebrate this occasion.  Most do not seem to  know that it is a Lard Shortbread--making it critical to roll the dough to only a 3/8 inch thickness and roll it frozen between layers of waxed paper.  The cookies were originally cut into the fluer de lis shape so the women could say as they cut out the cookies "stamp out the French".  Many not having a "man and a tin can" would cut the cookies into a Spanish fan with a small sharp knife. (The reason being cans and canning were invented at about the same time in France and not many cans had made it to Mexico--and men were scarce as they were in the Militia.)

Our fresh, fresh anise seeds really make the cookies yummy and I am putting them on sale until Saturday, May 4.  Also our Chipotle chiles--critical for making the real Pico de Gallo are on sale as they are totally Mexican, created by the Aztecs as a way to preserve red ripe jalapenos by smoking them. Pico de Gallo is traditionally served over Fajitas--so I am sharing all of the above recipes here. 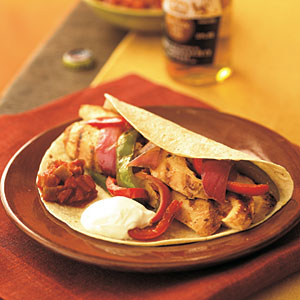 This salsa is supposed to be so hot you will jump as high as the top of a cock’s comb and kick your heels.  This is the literal translation of this dish’s name.  The salsa originated in northern Mexico and was originally made with chipotle chiles.   This salsa is a staple with fajitas.

Combine all the ingredients in a medium-size bowl, cover, and marinate at least 15 minutes to develop natural juices before serving.