Next week I will be in Oaxaca and already I am  thinking about their specialties that I look forward to sharing with our group.   Perhaps one of the main reasons I love Oaxaca so is their indigenous cuisine.  The Zapotecs are quite  creative  with their  cuisine--probably due to the fact they were surrounded by huge mountains and did not venture far from their area around Oaxaca City.  Their original cuisine  did not feature meat as they did not have access to large animals until the Spanish came in the early 1500's. 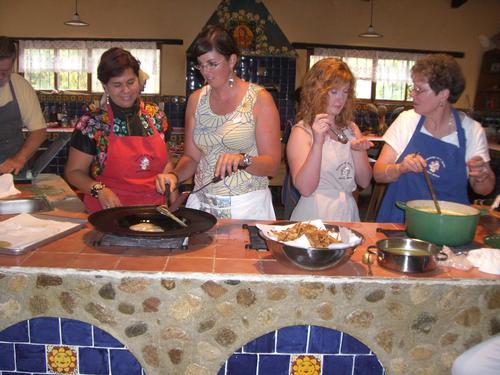 Oaxaca is often called the Gourmet capital of Mexico and is known for many specialties.  Especially their seven famous moles.  We will be making some of them in one or more of the three full participation cooking classes.  Moles feature a yummy complex sauce prepared of many roasted ingredients that are finely blended together and served over rice.  They are also known for their appetizers and small meals...I am sharing  two famous recipes today.  The Clayuda or sometimes spelled tlayudas is the pizza of Oaxaca.  Memolitas are a relatively new appetizer that has really  become quite popular.

The architecture of Oaxaca is quite distinctive and abound all over the city, especially in their churches and other famous buildings. Their beautiful original Cathedral is now a museum, a short distance from the hotel where we stay.  It was started in the 1550's and finished a century later.  Next door is an interesting  botanical garden.  The area around the church is what I think of as their Park or Madison Ave.  with lovely little shops, many of them featured in the movie about the life of Freida Kahlo.

Pep up your summer cooking with our pure chiles, which are all on  a 25% off sale  until Thursday, June  10 at midnight.   The chiles on sale are our Mild and Hot,  Caribe, Pequin Quebrado and Green Chile Powder.

Our next day cooking class July  8 features the  delicious and exotic combination of Chocolate and Chile--a combination the Aztecs are often credited with creating.  We will be announcing many more day classes very soon.  The next two  weekend classes are July 16-18 and August 20-22.  In these classes, we feature the famous traditional dishes of New Mexico, plus some innovative dishes.  You can view the menus by selecting weekend classes  on our home page--www.janebutelcooking.com.    Our next week long class is October 25-29.  All of our classes feature 100% hands-on cooking.

Here are the recipes-- 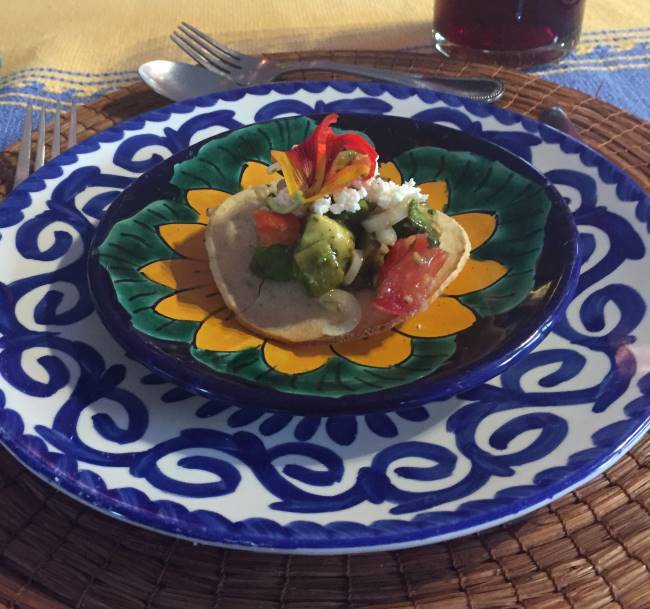 These  appetizers are typical of Oaxaca and are pre-Columbian.  They are very similar to the Clayuda—only more festive with a variety of possible toppings.  They are also similar to a tostado except the Memelitas usually are made from fresh masa—not a previously made or commercial tortilla.

Salsa of your choice

I remember first trying these in the delightful green pottery village of Santa Maria Atzompa outside Oaxaca.    Sometimes spelled Tlayudas, these are often called the Oaxacan pizza.  Various toppings can be added such as roasted and shredded meats,  pickled jalapenos, etc.

2. Meanwhile heat the lard or oil in a small skillet. For main dish size, fry each tortilla until crisp.  For appetizers, cut each tortilla in quarters, cutting almost to the center, but leaving the center intact.            Fry each whole, tap center of tortilla when crisp to break apart; then place on paper towels to drain.  The tortillas can also be baked (see note below).

Note:  To cut fat, bake the tortillas at 425° F for 10 to 12 minutes or until crisp, placing them on a cookie sheet and using a smaller sheet centered on top to weigh them down for the first five minutes.  Then remove smaller pan and bake until crisp – about 5 minutes more.