Last week I started with commenting on the essential herbs of Southwestern Cooking and began with cumin--an ancient herb with a great deal of curative properties.  Mexican Oregano along with cumin is also a popular complement for chile laden dishes and is somewhat controversial.   Having the name of oregano, one would expect it to be from the same family  as other oreganos, however it is not.  Italian or Mediterranean oregano is a member of the huge and diverse mint family.  Mexican oregano is actually a first cousin of lemon verbena and is milder and somewhat citrus like in its aroma.

Mexican oregano and cumin are often paired as the most popular herbs in Southwestern or chile cookery.  Most, including myself  feel it is best to leave it out if you do not have Mexican oregano  when you are cooking Southwestern and chile dishes.  The Mediterranean oregano is much stronger and does not complement , instead it rather competes, altering the expected flavor.

Mexican oregano looks a great deal like Cuban oregano,  yet has a stronger flavor than the Cuban variety which is often grown as a houseplant.  Mexican oregano is indigenous to the Southwest and Mexico and grows wild in the foothills.  Lately it has been in short supply and the price reflects that in a higher price.  Nonetheless, I am offering ours on a 25% discount through next Sunday the 16th.  As with all herbs, storing them in glass jars in the refrigerator assures the freshest flavor. 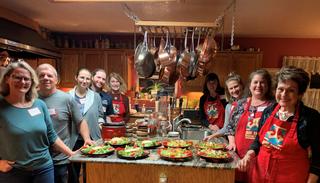 Since last week's Red and Green Chile class sold out, we are offering the same class next Thursday, the 20th.  We will soon be offering some more classes, so keep "tuned".

Here's a couple of recipes that call for Mexican Oregano--

I often serve this right from the grill while guests are gathering. I find it very popular with all who sample it. You can decrease the olive oil even more than I did from my original recipe, but the flavor suffers in direct proportion.

Note: Carefully spoon flour when measuring; do not scoop cup into flour container, or you will have too much flour. Level off with a spatula.

This is one of my all-time favorite risottos. The richness of butternut squash, which just happens to be the most nutritious of  all squash is foiled with the delightful edge of the truffle oil, making it is amazingly delicious.

1. To roast squash--preheat oven to 450°F. Cut squash in two, just at the point where the seed cavity starts or it starts to become bulbous. Cut each half in half, then remove seeds and cut into ¾ inch wide slices. Toss with olive oil, then sprinkle with ½ teaspoon salt. Place slices, skin side down, in a shallow baking pan in middle of oven until tender and golden, about 30 minutes.

2. Start risotto after squash is in the oven. Bring the broth to a boil, then reduce to a simmer and keep at a bare simmer, covered. In a 5 quart Dutch oven or heavy pot, heat 1 Tablespoon of olive oil, then add the onion and cook until clear, add the rice, garlic and ½ teaspoon cumin—cooking and stirring just to coat.

3. Then add the hot broth ½ cup at a time. After the first ½ cup, stirring constantly, add the second ½ cup when the liquid has been absorbed. Continue stirring and adding broth until rice is creamy looking, but still firm—about 20 minutes total cooking time. You may have some broth remaining.  Stir in the arugula or baby spinach.