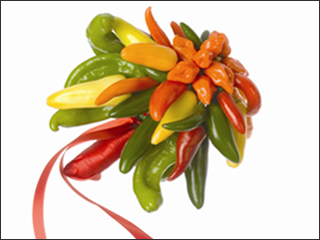 Green chiles are the unripe red chiles.  There are numerous varieties of popular American green chiles that tend to all being grouped as Anaheim green chiles, however the varieties are quite diverse and the flavors and piquancies vary widely.

First a side note about how the Anaheim name came to be.  The Ortega family were very successful growers of green chiles in southern New Mexico.  However, the growing season here in New Mexico is only one season a year. Somehow, they discovered that if they were to relocate their chile growing business to southern California in the Anaheim area, they could grow chiles continuously and become much more prosperous.  Their chiles became widely known and the their canning company, known as the Ortega brand pretty much became synomous with American grown chiles--and became a generic term.  Even the Chile Growers of New Mexico could not get the name to change.  The bottom line is if you are looking for green chiles and you see the term Anaheim posted with green chiles, they are what you are probably what you are looking for, if you are preparing Southwestern or Tex-Mex dishes.

Our July 18-20, 2014 cooking school will feature fresh, locally grown green chiles and the best way to roast them over high heat, rotating them once, browned to get an even browning.  Then they are plunged into ice water to stop the cooking.  Once cool to the touch, they can be peeled and used in any green chile featured recipe.  Or, they can be drained and flash frozen on cookie sheets until very firm and frozen in freezer bags.  (Always be sure to label the date.)

The benefit of this method is the green chiles keep much longer and you have the ability to use just one chile or several, depending on the end use!

In our class, we will roast our chiles on a grill and review how they can be roasted under a broiler--with an electric broiler being best as it has hotter, direct, infra-red heat.  We will make the original Salsa Fresca, the political salsa of Mexico and its history will be reivewed in class.  Also, we will make green chile-chicken enchiladas and blue corn crusted chile rellenos.

At the end of each class, every participant enjoys the delicious bounty of the day's cooking.