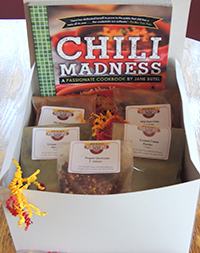 The count-down has begun!   To ship gifts out of town, it is best to get them off this week, definitely by December 17 for Priority  Mail.   We do ship Priority Mail and will drop-ship each gift to the person(s)  you wish, making your giving quite easy.  In each gift box, except Holidays in Mew Mexico--where we include a printout of the recipes instead, we include an appropriate cookbook, autographed as you would like.    All of our Gift Boxes are discounted 5%  until December 24.  We have 10 different gift boxes from which to choose.  If you want each box drop shipped-then order each separately. 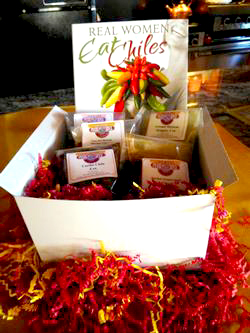 Or, if you would prefer, we  will prepare a gift certificate made out to whomever you wish to give it to and email it to  you.  All of our classes are discounted 10%, except the Oaxaca Culinary Tour, also until December 24.  To purchase a gift certificate, just call  us at 505-243-2622 or email us at info@janebutelcooking.com with a preferred time for us to call you.

We had lots of fun last Thursday, Making New Mexican Holiday Specialties.  Every time we make the traditional holiday Bizcochitos,  the state cookie of New Mexico, the participants are always amazed at the wonderful, fresh flavor and soft texture instead of a hard, gummy, floury texture.

This cookie has a very interesting history.  It was originally created by the Spanish women in Mexico to honor their husbands as well as the native Mexican men who assisted in defeating Napolean's army at the battle of Puebla on May 5, 1862.   (By the way, in Mexico this battle is referred to as the Battle of Puebla--not Cinco de Mayo as it is up here in the "States".

Led by Santa Ana,  the Mexicans who were not allowed by the French to organize as a militia nonetheless  defeated the French.  The Mexican population had grown tired of the huge restrictions, the French had imposed on their lives and had determined to force Maximilian and Carlotta out of the country, back to France.    It was on this evacuation trip that the Mexican army attacked the French who were escorting Maximilian and his wife to the port of Vera Cruz, that this  successful attack was carried out.

The clever Spanish women came up with the idea of creating a shortbread created with lard instead of butter and featuring anise seeds and brandy and shaped  like the fluter de lis--the flower in the French flag.  The women who had a man available with a plyers and a tin can fashioned a cookie cutter--otherwise they shaped them using a paring knife.  (Tin cans were hard to find as they were  just recently  invented in France by a person who won an  award from Napoleon for creating the idea at the National French Exposition.)

The reason my cookies are so different is we create the dough like a shortbread, using a strong gluten containing flour such as the red label of King Arthur and  we beat the lard a great deal until fluffy and then  roll the chilled dough between waxed paper, never using extra flour.  Due to the  shortbread type dough, we roll them to a thickness of about 3/8 inches--just under a half inch.  These cookies keep exceptionally well and the dough can be frozen for rolling and baking weeks or months later.  Not adding extra flour and rolling them thickly creates much more        flavorful cookies.  I am including the recipe, below.

I still have a few openings for our fun "Gifts from a Southwestern Kitchen" where you learn gifts to create and take some home.  It is set for the afternoon of December 16 at 2 PM.

1 cup plus 3 Tablespoons sugar, divided (3 T are used for topping--not in the dough)