I am sure you have some or even many favorite foods that have a sprinkle or a bunch of cinnamon in them.  Did you know that cinnamon has a great deal going for it  Here are some fun facts to help in your health fitness--

Provide a high source of antioxidants

Can Help to Lower Weight

Cinnamon comes from the bark of a very special pine tree that has very thin bark.  The best cinnamon in the world comes from Southern China or Vietnam, now known as Saigon Cinnamon.  Most of the cinnamon sticks sold in grocery stores are not of this type and are very hard and thick--having  less health benefits.

Always look for the thin, crumbly Cinnamon sticks and Chinese or Saigon ground Cinnamon.  Often times the higher quality Cinnamon is sold as Canela, the Spanish word for Cinnamon.  This is because until fairly recently the very finest Cinnamon had to be imported from  China through Mexico, a Spanish speaking country and is called Canela.  That is because after the Communist takeover in China an embargo was placed on all Chinese goods by the US Government.  As we all know that embargo was lifted on most everything but many culinary items such as Cinnamon.

Recent research  indicates that 1/2 teaspoon up to 1 teaspoon  or 6 grams of cinnamon is an optimum amount to gain health benefits.  Too much cinnamon can be toxic. 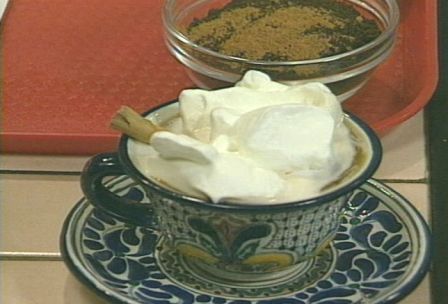 What and how can you place cinnamon in your diet?  Through beverages such as Chai Tea, adding Cinnamon to coffee, making it Mexican style (pictured left),  or placing cinnamon in hot or cold chocolate beverages.  The ancient Aztecs discovered the amazing benefits of placing Cinnamon in their chocolate drinks before going to battle.  (If they did not have Cinnamon available they used hot red chiles in  their chocolate drink.)  By the Way the word chocolate was created by the Aztecs who discovered it and the word chocolate in their language means bitter water.  So the Cinnamon helped to make it more palatable.

Cinnamon is a frequent flavor for breakfast--in cereals, sweet rolls and breads and beverages.

Cinnamon is great on vegetables such as sweet potatoes, squash, carrots, and in soups and such.

In our Pecos Valley Spice Co. we sell the highest quality, very fresh Saigon Ground Cinnamon and we are making it 25% off for the next two days--until midnight on Saturday. 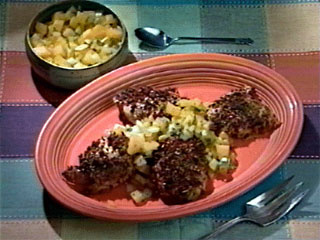 This is a popular Sonoran chicken dish that is somewhat reminiscent of picadillo. You can use flat beer, or even frozen beer that’s been left from a keg.

2. Cover and simmer until the chicken is tender when pierced with a fork, about 1 hour. Add the piñon nuts, olives, and capers and heat through, uncovered, about 5 minutes.

This light, fluffy pancake was first introduced to me by a longtime friend, Janet Pugh, who years ago made them for me. She had lived in Germany a number of years and just loved these. They are puffy, golden and as pretty to look at as to eat.

They are started on top of the range and finished in the oven, kind of soufflé like. Serve them with crispy bacon or sausage and fruity jam such as red raspberry or warm maple syrup. 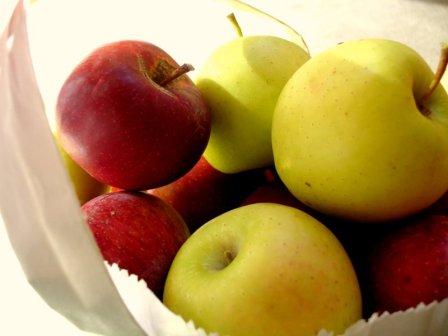 2 large or 3 medium apples, peeled and cut into ¼ inch thick slices (Golden Delicious or similar apple is best for this)

1. Preheat the oven to 450F. Using a heavy, non-stick skillet suitable for taking to the table or use any skillet and place the cooked apples in the bottom of a pretty, pottery pie plate or oven-proof casserole.

3. Whisk the eggs with the milk and oil. Then stir in the flour and salt, sprinkling it over the top of the liquid ingredients to make it easier to mix.

4. Add the egg mixture slowly and carefully to the top of the apples, making sure that the apples don’t start to float. Bake until it puffs up and becomes golden brown…approximately 20 minutes. Remove from oven and dust with powdered sugar, using a small sieve to make a fine dusting. Cut into wedges and serve immediately.

This cake was created to be baked on the grill in a 9 x 13 inch baking pan. However, it bakes very well in an oven and is quite moist and flavorful, yet low fat. The fruits and zucchini add moistness. (It will bake fine on the grill when you are preparing a meat such as ribs or halves of chicken that take a moderate 350F temperature.) And, this is just one more way to cook zucchini! You can always substitute zucchini for carrot in breads and cakes and vice versa, carrot will substitute here for the zucchini.

1. Preheat the grill or oven to 350F if not already hot. Butter a 9 x 13 inch baking pan that will not get damaged on the grill or cover the bottom with foil. Or use a foil pan.

2.Combine bananas, oil and sugar in a large bowl. Using an electric mixer, bea until sugar dissolves. Beat in eggs, one at a time. Mix in zucchini, pineapple and vanilla. In another bowl, combine remaining dry ingredients and stir until blended. Then add the dry ingredients one-quarter at a time, mixing after each addition. Mix only until all ingredients are well combined.

3. Turn batter into prepared baking pan. Place on grill rack and cover grill. Bake about 45 minutes or until a wooden pick inserted in center comes out cean and cake springs back when gently pressed. Cool on a cake rack. Dust with powdered sugar, if desired.