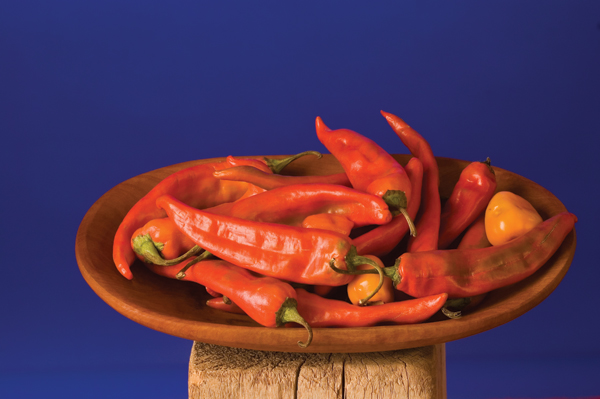 My good friend, Donna Peck, invited me to give a joint demonstration of cooking with Chiles and Lilies.  Of course I said "Yes" and was very enthusiastic about working to combine the two.  Never did I imagine that both chiles and lilies have a very long tradition in China of being a healing agent possessing lots of curative properties.

The Chinese food markets sell dried day lilies to be reconstituted by adding boiling water to be added to most any dish to increase it's healthful properties.  And of Course red or green chile can be added to most any food to enhance both its flavor as well as its health.

Chiles were not allowed to be consumed as a food in main-land China until after the Communism take-ove and then chiles were released from being a pharmacuetical to being available to everyone to eat as they wished.  (You may be thinking how come the Szechuan, Mongolian and Hunan cuisines  had chiles?  They were always allowed to eat them as they were nomadic cultures adjacent to the Bering strait and the first to get them from the Americas eons ago.  ALso, the areas where they inhabited were part of the Gobi dessert and very sparsely settled--impossible to police for chiles.  Hence we have those peoples to thank for their yummy hot and spicy dishes.)

In testing the recipe yesterday that I am going to prepare for the April 8 demonstration for the Albuquerque Day Lily society--I discovered much to my surprise how well they enhanced the Grilled Corn and Spinach Enchilada dish.  I decided to share the dish with friends and made two recipes the Grilled Corn and Spinach Enchiladas with Day Lilies and Green Chile Chicken Enchiladas--both of them rolled.  They turned out bequtifully.  I wish I had taken a picture of them.  I made each in a round pottery quiche baking dish, encircling the Grilled Corn ones with the spinach.

These are best made with grilled fresh corn on the cob, caramelizing the tips of the kernels. The day lilies add an exciting new dimension, making for a yummy and very pretty dish.

8 corn tortillas, heated on a comal or griddle

*Substitute ½ cup chopped onion for the day lilies if desired.

**If using frozen corn, place it in a heavy, seasoned skillet over medium-high heat to brown or lightly brown under the broiler.