Caribe Chile on Sale, great for Spicing Up Fruit Desserts 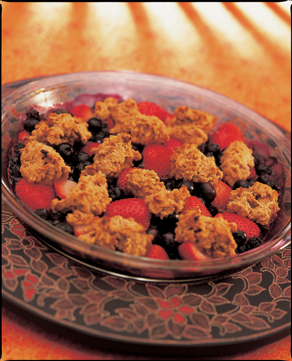 Have you ever tried adding chile to a fruit dessert?  You may be very surprised how delicious it is.  Many of us frequently add cinnamon to desserts to add a bit of personality to the dish.  Chile acts just like cinnamon,  in fact you can use both for extra special flavors.  Green chile as I have been mentioning the last two weeks is terrific in Apple Pie and Coconut Cream Pie.   With peaches and plums in season now, try  a sprinkle of pretty caribe chile on most any peach dessert.

We just got in a fresh shipment and  are offering our wonderful, pure caribe for 25% off!

One of my favorites is Peach Butterscotch Crisp.  Another and a very quick dessert is a fruit tostado made on a crisp corn tortilla.  Clafoutis, a French fruit dessert benefits from the sprinkle of caribe--both in flavor as well as in appearance.

Cajeta sauce, the carmelized sugar topping, popular in Mexico pairs well with caribe--and even the smokiness of chipotle.  I like to make crepas or crepes and top with a yummy ball of creamy vanilla ice cream and cajeta , with a  topping of sliced peaches and a sprinkle of the caribe. 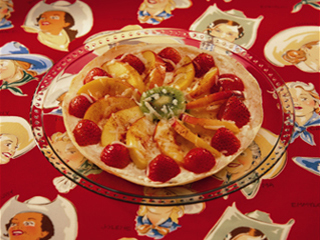 Really good cinnamon like the canela from southern China and a similar one from Saigon (that is what we sell) is really spicy--reminiscent of chile.  In fact, amazingly, the ancient Aztecs used cinnamon in their chocolate (a practice still done in Mexico today) and lacking cinnamon, they used chile.  In fact did you know the Aztecs were the ones who discovered and developed chocolate, which in their ancient language translated as "bitter water".  Chocolate was initially made into a drink for warriors going into battle.   I bet they would be amazed at how popular chocolate is today and is still infused with chiles by some!

Our Green Chile class is almost sold out and the New Mexican Favorites is selling well also.  I will be developing a fall schedule later in the week  for our fall classes and weekends.  We still have the October 25-29 week long class.  And--private and team building classes are very popular.  (for either of those, just call me at 505-243-2622 or email me at info@janebutelcooking.com.

Crunchy, gooey, and wonderful! The spicy crystallized ginger and caribe chile really add to the flavor. You can substitute other fruits for the peaches-try apricots, any kind of berry, plums, or rhubarb. If you don’t mind the calories, top the crisp with whipped cream or ice cream.

2 Tablespoons caribe chile or to taste

2 cups fresh or frozen unsweetened sliced peaches or other fruit (thaw frozen fruit just until mushy, and then pull apart with a fork)

Want a departure from the everyday? These unusual tostados are a refreshing break from the traditional hearty flavors of beans, cheese, and jalapeno. You can use almost any firm fruit, alone or in combination—I like nectarines,or peaches, grapes, apples, and strawberries.  (photograph above)

4 Tablespoons cream cheese (about half of an 8-ounces package)

Spread the cream cheese evenly over the tortillas, and arrange them on individual serving plates.. Combine the fruit, lime juice,  in a bowl, and toss to mix. Then arrange the fruit on top of the cream cheese in an artistic fashion (sometimes I make a face using a strawberry for the mouth, grapes for the eyes, and apple slices for the eyebrows; other times I arrange the fruit in concentric circles or in crisscrossing lines.  Sprinkle the caribe chile in a confetti toss.