Chili is probably the only dish that Americans can lay claim to originating.  And it all started way out West with the cowboys and the cattle drives.  Did you know that is when chili became quite popular? For a few years, I spear headed a drive to create Chili as the official American dish.  I got help from the New Mexico and Texas US Senators and Representatives, and we had fun with it--but as all of  you know, it is not easy to get a bill that in non-essential passed--when really important "stuff" gets booted.

So, back to the subject at hand.  How it all started "way back when" was with the Alamo in San Antonio , Texas.  The Texans, after successfully  defending the Alamo against a much more sophisticated Mexican Army decided they really did not want to go "through that again".  They decided what they had the most of was land.  So, they offered free land throuogh the newspapers in many European countries and the Germans seemed to take it up the most.  They brought beautiful herds of cattle with them to their newly acquired free land--thinking "what a deal".  But not thinking that there was little or no market for their beef cattle.  (That is why Texas border recipes or Tex-Mex are so heavy with beef.  And New Mexican recipes stemming from the Spanish influence are more pork oriented.)

So--when the railroad came out West--then the German landholders with all the wonderful beef now had a market.  Cowboys were hired, cookies (trail cooks) trained and off they went, eating what amounts to Bowl O Red every day--three times a day as they worked the trail, taking the beef to market to the rail head in Dodge City, Kansas where, as it so happens, was where my maternal Grandfather was in charge of the Santa Fe railroad headquarters there at the time.  He told me so many stories--really worth telling.  But, more later. 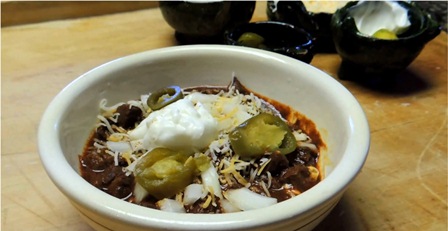 To help celebrate the good old American wonderful way with the Fourth of July--what better than to make and serve Bowl o Red.  In case you do not have the recipe, I am including it below. And, our pure, all natural chiles with no additives or preservatives are on sale 25% off.

I am sure you have always heard--"apple pie, a Chevrolet and chili"  that is good American tradition.

By the way, I got a huge, wonderful, overwhelming response to the online "All About Chile" class and will give you the details next week--we are on the way!!!!

We still have Oaxaca Culinary Tour, week long and weekend openings and would love to have you join us in person!

To help you celebrate--with our pure chiles--they are on sale for the rest of the week at 25% off.