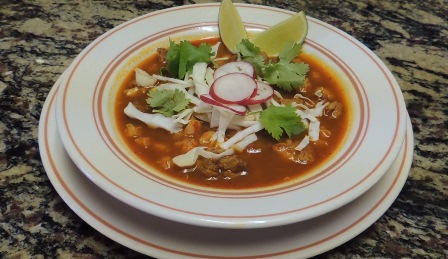 Did you know that Posole has it's origins in Old Mexico, where corn was originally cultivated into the crop it is  now?  Did you know that if corn had not been developed by the Mexicans, the world population would be sizably less--some say almost half what it is now?   Corn feeds the world.  It will grow everywhere--in all kinds of climates and various soil conditions.

The ancients of Asian background who initially settled in Mexico, noted after the asteroid  hit the earth, that there was a simple grass like green bladed plant.  They recognized that it was very similar to rice with which they were familiar.  When they started cultivating it, the plants  developed an edible product, a cob with kernels on it.  As they continued development, it  became a very popular foodstuff.

Believing in astrology and that only every seven years could they depend on having a successful crop;  led  them  to experiment with ways to preserve the corn.  This challenge eventually  led to posole.  What happened is that they discovered that if they stored the corn in the coral caves dotting the landscape in Southern Mexico,  the corn did not rot or get infested with vermin.     This in turn led to packing the limestone and grinding it and taking the limestone where the people were--all over the middle and southern parts of Mexico. 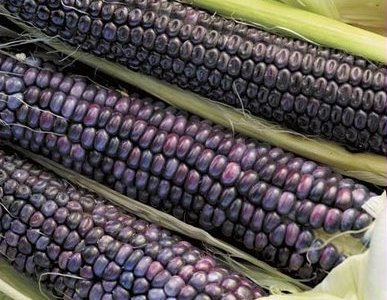 It was very difficult to take the limestone  to the  northern parts of Mexico., as it was too far.  So, they found that when they burned the pinon  tree wood, which burns down to a complete and total whitish ash, that  they could store the corn sprinkled with the ashes and it accomplished the same purpose as the limestone--preserving the corn.  That in turn, came to the development of blue corn which does not look dirty when stored in the blue-grey ashes which in turn led to deifying the blue corn.  And that led to each of New Mexico's Pueblos creating their very own variety of blue corn--not to be shared.  Also, there was no impetus  to work on developing the corn to create greater crops, which lead to the incredible shortage of blue corn; hence the more costly prices.

As an aside, it is very interesting to note that corn is very healthy, having all the essential minerals, vitamins and amino acids for healthy living. except Lysine, an essential amino acid.   In white, yellow and all colors of corn except blue corn,  Lysineis not present  in a readable form for the human stomach.  Blue  corn is the only exception.  The human stomach can read the Lysine in blue corn.  That probably explains why the Ancients revered it so.

With corn being their life-line to keeping alive,  religious significance resulted--with the Corn Goddess being  a very popular idol.  And, as a result the dish, Posole,  became a very important  food for life.  The Curanderos in Mexico (women who practice ancient medical cures) always give Posole to people who are infirm or sick.

In Mexico, they serve Posole  with garnishes  of fresh lime wedges, cilantro leaves, shredded cabbage and thinly sliced radishes and sometimes avocado pieces.  Try it.  Posole is wonderful that way.  Their favorite way of cooking posole is with well browned cubes of pork shoulder.  I am attaching that recipe.

So, you can see why there is such a reverence for Posole--for eons it has fed the population and kept them well.  Posole and Tamales (which are made with ground Posole) are both considered very important  and are popular for Christmas celebrations, New Years, birthdays and all kinds of feast days.  One pound of posole, once cooked with the pork, will feed up to 15 people, a great economy as well.    And it is healthy, no wonder it is  filled with many blessings!

We always prepare Posole in our Holiday classes, weekend and week long classes.  All of our classes  listed on our website at www.janebutelcooking.com are on a special discount until Christmas Eve, as are our products, also on our website,  which have not been increased for several years ( amounting to a discount).

We are placing our Posole on a 10% discount until next Sunday.  One note, our Posole is more flavorful and nutritious,  than the commonly sold wet Posole, because it is made the old fashioned way of soaking the corn kernels in lime-water and then drying them, so that the nutrition and flavor soaks back into the kernels... rather than selling the corn kernels while still wet, not allowing the flavor and nutrition to dry into the corn.

Here is our Posole recipe.

1. Simmer the posole in unseasoned water until it becomes soft and the kernels have burst open; it usually requires 1-1/2 to 2 hours.  Stir occasionally  and make sure the water level is at least an inch above THE  kernels.

This recipe is  reprinted with permission from Jane Butel's Chili Madness, 2nd edition.